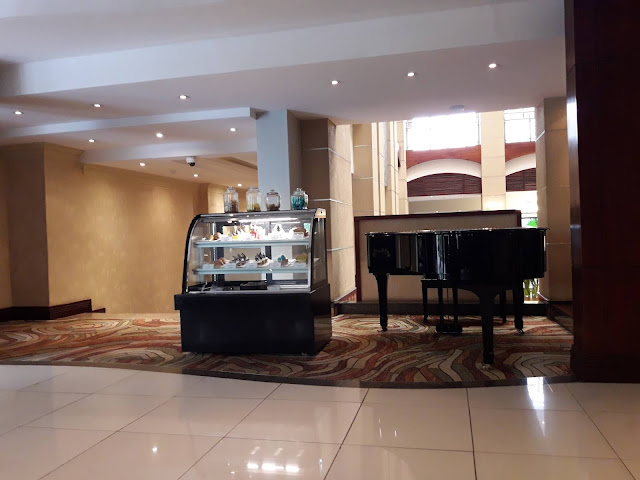 Yesterday was a really interesting day. We got a call out from Anselm, the pianist at Serena Hotel. He was having trouble with A#2. After playing the note, the damper wasn't lowering properly and the note continued to sustain.

This is only the fourth grand we've seen in Kigali. We tuned one for a private owner, the Belgian Embassy has one, and there's a baby one at Bamboo Chinese restaurant on the roof of T2000. There was also the matter of the one in Bukavu, but it wasn't anywhere near as glossy as this fabulous seventeen-year-old Yamaha. 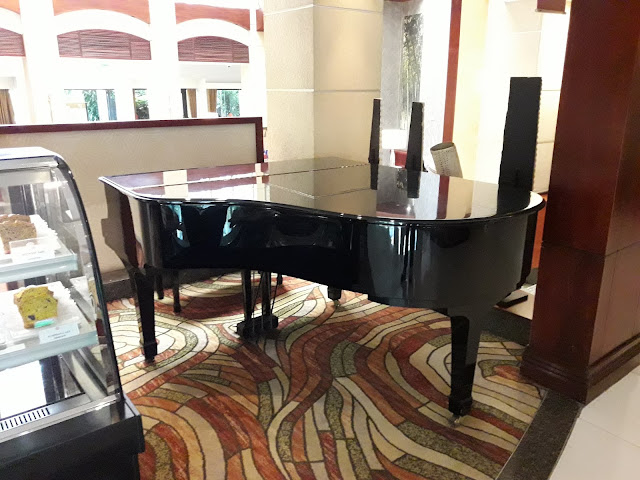 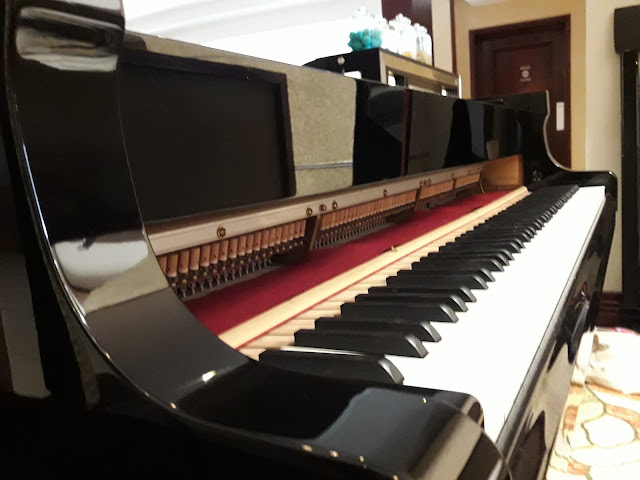 Generally, we haven't dealt with grands for the simple fact that they are so rare and we haven't had much opportunity. However, there is another reason we're hesitant. Grand pianos are very expensive instruments. Whereas you might be able to import a new upright for a couple of thousand dollars, something like a Yamaha grand can cost anywhere between £15-30,000. Currently being a hobby project and not a business, we don't have insurance for this. If we break anything, we need to fix it, and the cost, combined with very lengthy postal delays, makes working with grands a nerve-racking prospect.

However, Anselm had been in contact since November, asking us to check it out, because there really was no one else able to do so.

It was very clearly a damper issue. Instead of falling between two strings to silence them, it was twisting out of place and resting across the strings without enough pressure to silence them. Unfortunately, this meant removing the entire action from the piano to get to the damper at the back.

This is basically the entire process, thanks to our friend Steve Howard.


You can imagine, when this is your first time taking apart a Yamaha grand, it adds to the nerves to be doing it in front of a restaurant full of people.

Still, things went well and the action slid out without any resistance. Thanks to the bar staff, we placed it safely on the carpet nearby, as it was too heavy for Marion to lift by herself. 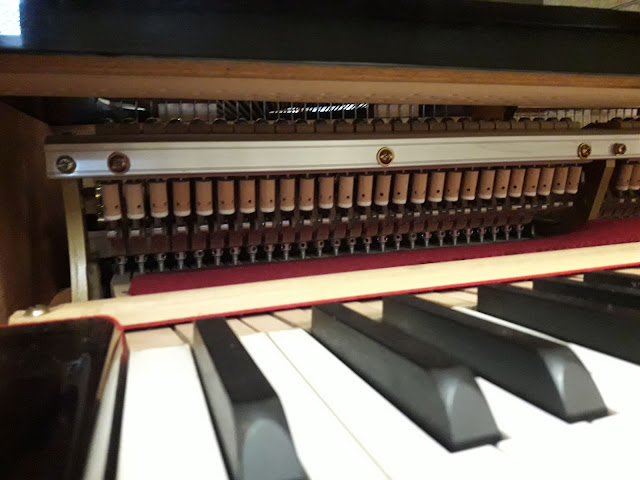 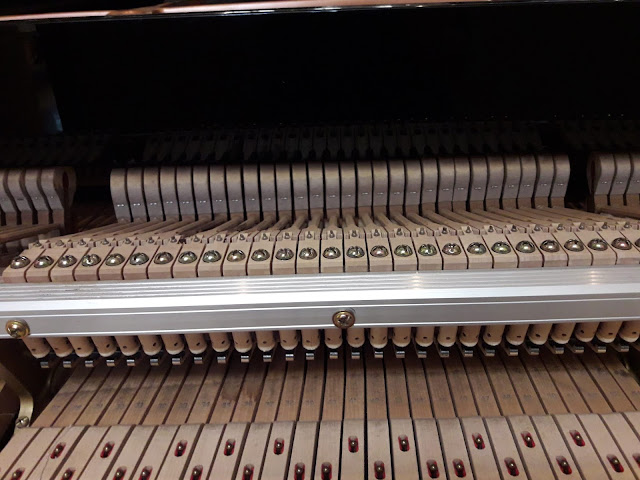 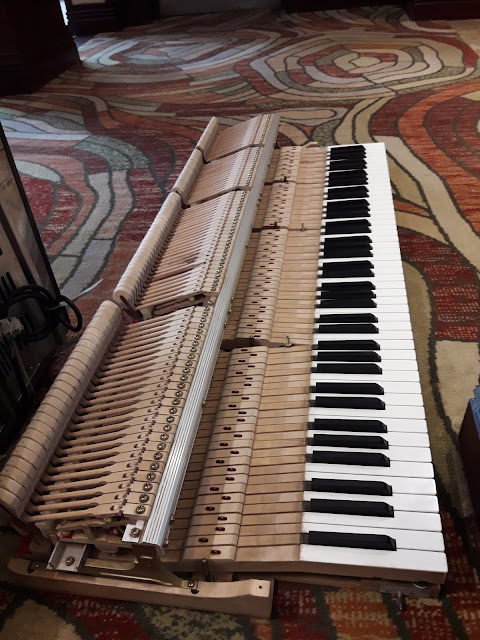 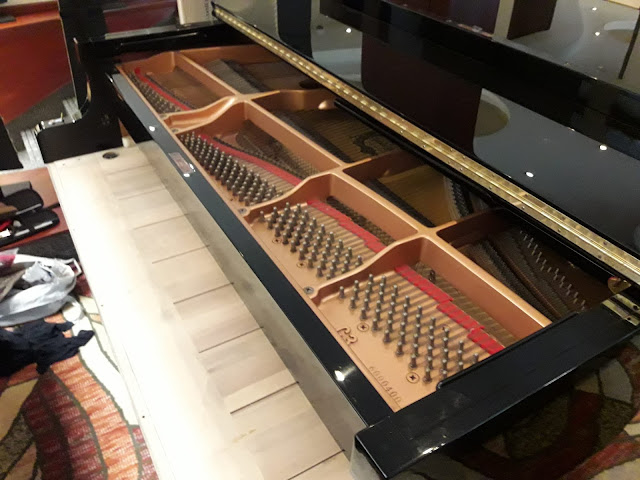 It is rather strange to look at any piano without its keys, but it does allow for a fun photo looking out through the strings from the inside. 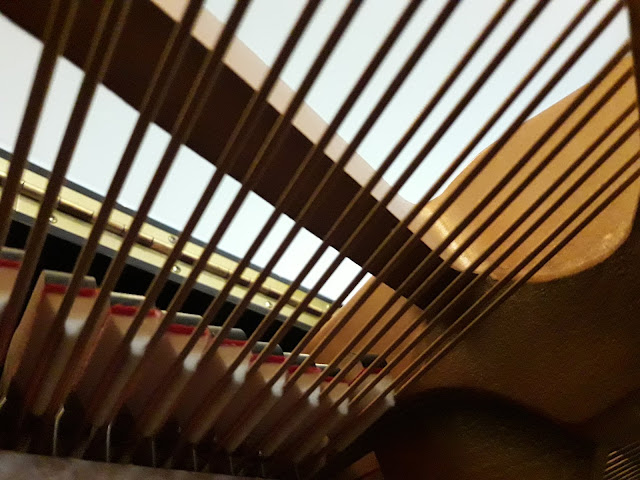 And it is like a mini-warehouse in there. There's space to lay out all your tools and rest your arms whilst you check to see what's going on. You can see the problem damper to the far right. The damper lever is slightly higher than the others because the damper hasn't dropped, it's resting above the string. 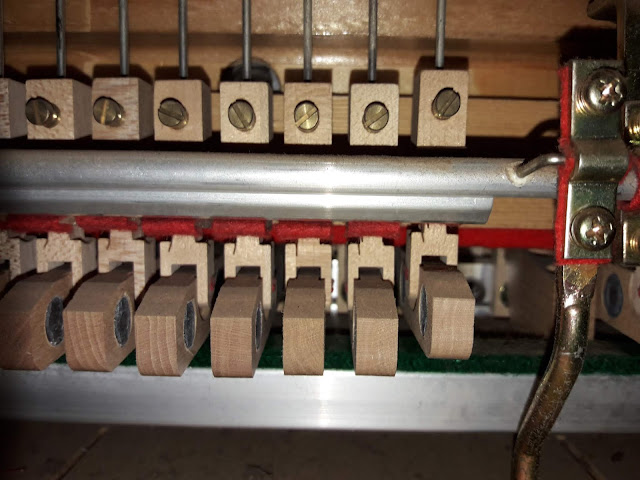 When you pushed the damper into place and played the note again, by pushing the damper lever up, the same thing happened and it refused to drop. By loosening the screw, you release the damper wire and can pull the whole thing up and out. We took that damper out, and the one next to it to compare. The troubled damper is the one on the right, but the wire is correctly positioned. It's at a funny angle because it's a corner damper that is shaped differently to fit snugly up against the string frame without catching. 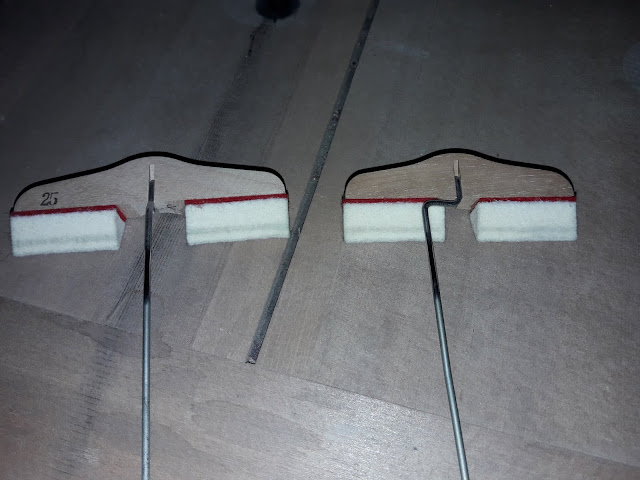 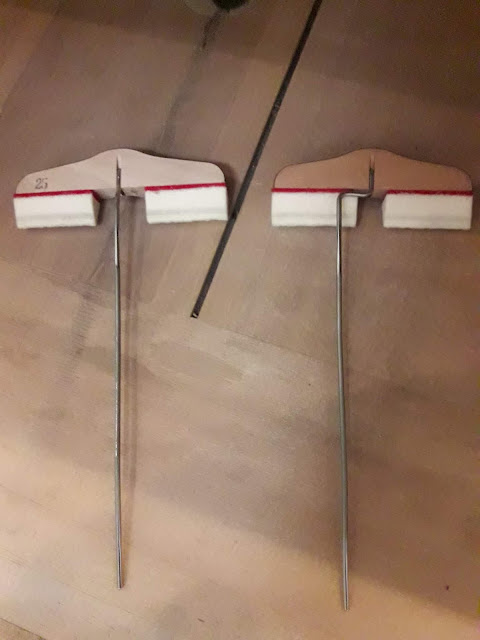 Satisfied, we called on the assistance of the bar staff again, to help lift the action back into the piano, and set about replacing the cheek blocks and fall board. 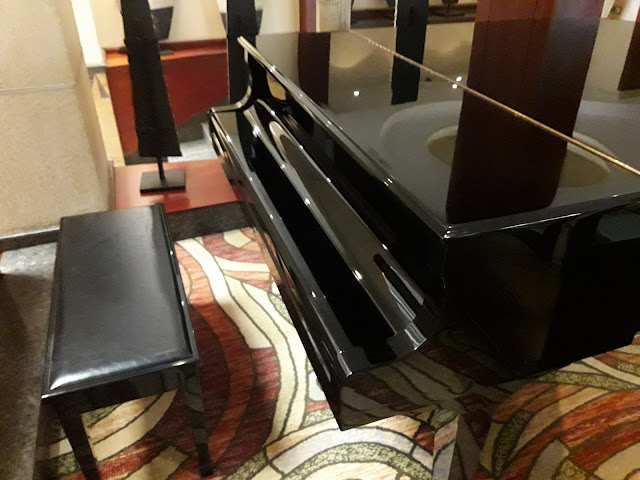 Yamaha pianos are disgustingly well designed. Everything slots smoothly into place as though the piano is happy to help. The fall board even has a slow-lower mechanism, so it doesn't drop shut with a loud bang, but slowly drifts closed like a fire door. Very posh instrument. Mind you, it's a very posh hotel.

Anselm came to check it out once we'd finished, and was very pleased with the results.


It was a great experience for us, though not one we're likely to repeat any time soon. This is a modern instrument, in good condition, and should hopefully have very few problems for a long time to come. Meanwhile, we'll get back to working with uprights and breathing easily.
at 10:20