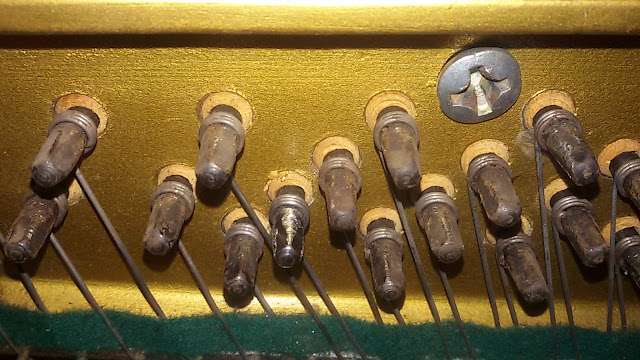 With a birthday party on the horizon, I really wanted to get Lirika fully tuned so that people could play her. I really don't play very well and I think my neighbours are getting sick of the same five songs. It also gives me a great deal of pleasure to hear other people and to know that the piano plays because I got her in shape.

I hit a bit of a snag on the bass section though. A tuning hammer is basically a socket wrench. Socket wrenches come with a star-shaped hole, and tuning pins are square. On the whole, that usually works fine, but on four of the pins the wrench just started stripping the pin instead of turning it.

You can see above. The really shiny pin in the middle isn't new, it's the same as the others but the corners have been shaved by the wrench. If you can't turn the pins, you can't tune them.

I put out a call on a local forum and someone suggested a hardware store near town. I headed down there and met the owner, Rocky. He's a lovely guy. When I explained the problem, he let me borrow a selection of tools to see if any of them would work. When none of them did, he sent me to meet a metal worker called Karabona.

In order to make the tool, I needed to show him an example of a tuning pin. This was my first ever time removing one from the piano. It was quite nerve-racking because, once the piano is strung, the top of the string is cut very short. I wasn't sure that if I took the string off, it would ever go back on again. Luckily there was a YouTube tutorial.

Karabona was fantastic and agreed to make me a custom-fitted square ratchet head which was ready within a couple of days. 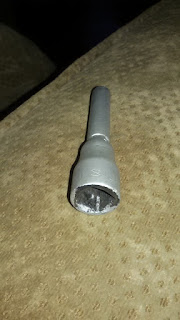 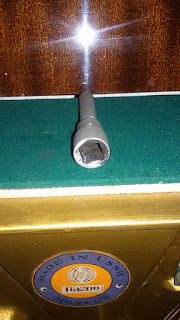 This style of ratchet isn't great for tuning. Firstly, if you're going to use a ratchet, you need a really sturdy one. You exert a lot of pressure on the pins and smaller ones won't cope. Also, a fixed handle allows you to switch direction really easily, whereas a two-way ratchet requires you to flick a switch on the handle. You change direction frequently whilst trying to hit the sweet spot on a string, so your thumb quickly gets sore. But it did the job on all except one pin, which was totally knackered. I'll replace the pins eventually, but the string has a unison so although it's out by quite a way, it's covered slightly by the second string which is in tune.
at 09:34 No comments:

Although the main issues were taken care of, so the keys all made a sound, some of them didn't make the same sound as the others. Instead of a nice, resonant thrum, you got a dull thunk.

After taking advice from Steve at Howard Piano Industries, and poking about a bit more, I came to the conclusion it was most likely the damper spoons. Each note has a damper, which dampens (stops) the sound of the string. This lifts up when you hit a note and goes back afterwards - unless you have your foot on the sustain pedal so that the sound sustains and does not stop.

On a few of the notes, the damper didn't appear to lift when I hit the note. This meant that the string couldn't vibrate fully, to give the rounded sound you want.

For this, I needed a regulating toolkit, this time from Howard Piano Industries rather than eBay.

A few weeks later it arrived, and I had yet another bag of mysteries to unfold. 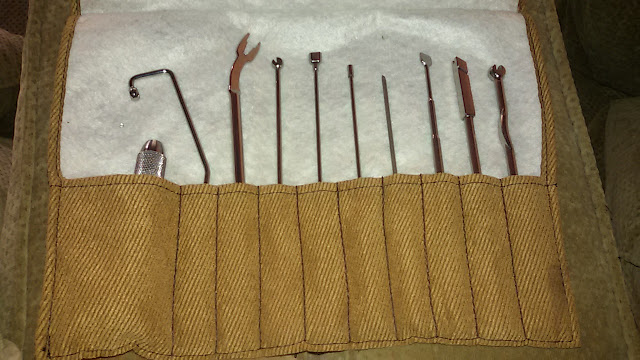 The other exciting part was learning to remove the action. All of the hammers are held together along a frame above the keys. This is called the action and you can take the whole frame out. Getting it back in again is slightly more tricky. 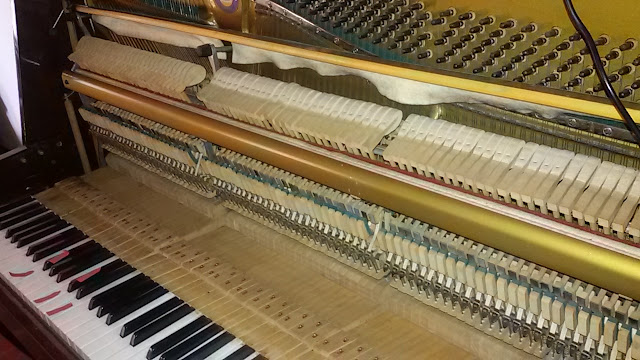 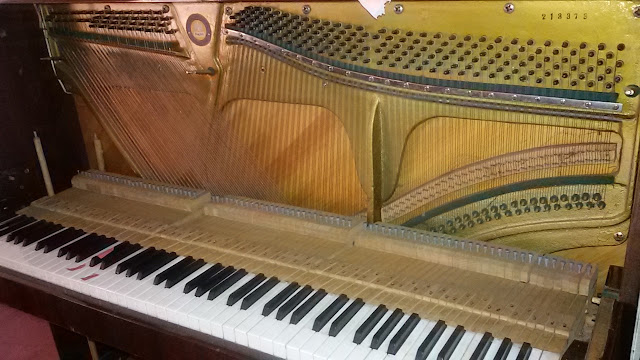 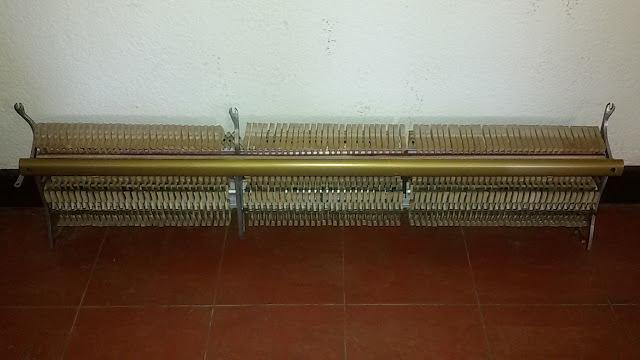 Once it's out, it's much easier to work on the damper spoons because it's hard to get the tool between the keys and to see what you're moving on the other side. But I've now learnt to do this, and to adjust the let off pins.

This has fixed the problem with all but two of the keys, which need further investigation. So, Lirika is now sounding pretty good.


As I mentioned, Lirika had a few problems when she first arrived. A few of her keys didn't play when you hit them. Poking around inside, I soon discovered the cause of this - broken elbows.

The elbow is the bit of raised wood on the end of a key, which causes the hammer to hit the string when you press down. Without the elbow in place, nothing sets the hammer in motion.

Luckily, all of the broken elbows were still inside the piano, and the solution seemed fairly obvious - glue.

Another simple fix was that one of the bridle straps had popped out of its hole, jamming two of the keys. It was just a case of lifting it up and slotting it back in. Et voila - two more notes played.

I was growing in confidence and utterly fascinated by the inner workings of the instrument. Pianos are extremely beautiful when you open them up.

Now that most of the keys were working again, it was time to tackle tuning.

As there aren't any shops selling pianos in Kigali, there aren't any shops selling piano parts. There's a fabulous guitar shop in town, but even they didn't know where to order the things I needed, so I turned to eBay. Many shops, especially those based in China, do free international delivery. Unfortunately, it does take several weeks for stuff to turn up and there is never a guarantee that what is sent will arrive.

A few weeks later, I was delighted to find this in my post box. 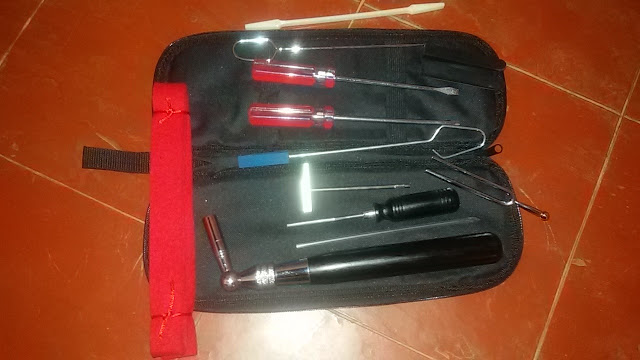 There is a strange fascination with things when you have absolutely no idea what they are or how they work.

I unzipped my little bag of mysteries and turned to Howard Piano Industries for help. Armed with a YouTube tutorial and the TuneLab app on my phone, I nervously set about messing with strings. 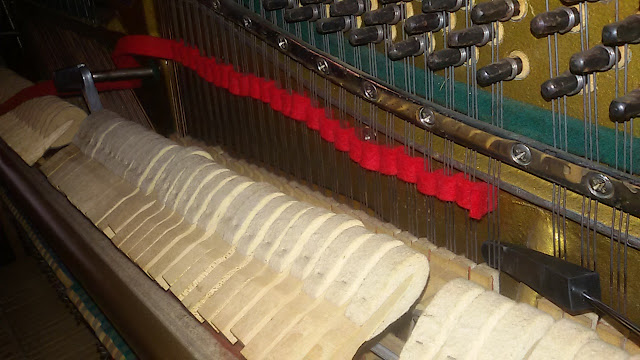 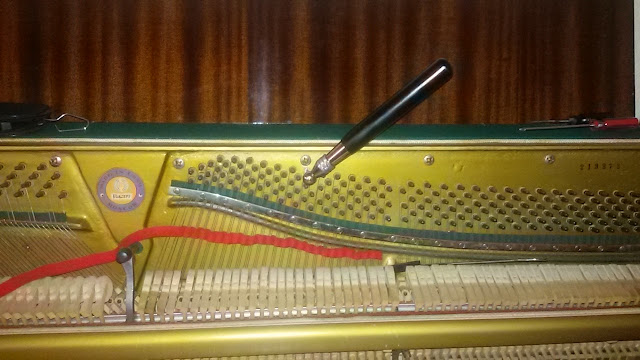 Tuning pins are really hard to turn. Sometimes you need to put a lot of weight behind them, and sometimes the slightest tap knocks them out by an entire note. To add to the problem, many of the notes have three string - a chorus of stings - also known an unisons. This means you need to silence the two stings either side of the central sting using a temperament strip, which is a long piece of felt that tucks between the stings. Once you insert the temperament strip, only the middle string sounds when you hit a key, so you can tune the middle string and then use your ear to bring the stings on either side to the same pitch.

It certainly takes practise, and I got a lot of that because I accidentally set the over-pull on the tuning app. So, essentially, I detuned the entire piano, realised my mistake, and had to go through and retune it again. That's around 230 strings. It's physical work and took me a couple of days.

Thankfully I didn't break any of the strings, and I can now say that I'm a fairly competent piano tuner.
at 02:47 No comments: 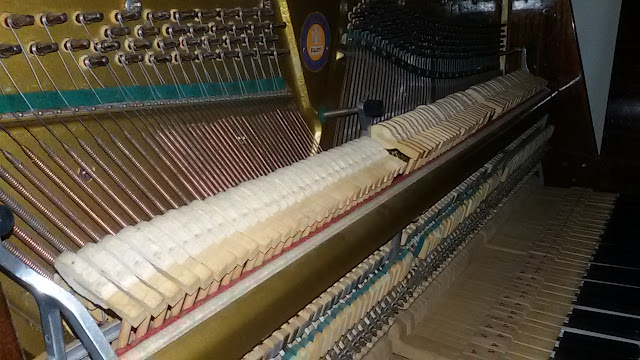 My name's Marion and I live in Kigali, Rwanda.

My mum and dad have always had pianos in their houses, so I guess I feel a house is a home when it has one.

The word 'piano' is usually synonymous with 'electric keyboard' - that's what people think you mean when you ask if there are any pianos for sale.

In December 2016 an Egyptian gentleman called Salem was moving back home and put his piano up for sale on a local forum. I went to take a look, not really knowing what I was looking at. A few keys didn't work, but otherwise she looked in fairly good condition. I paid what was, for me, a large sum of money - close to £1,000 - for an instrument you could probably get for around £250 in the UK. People even give them away for free on Craigslist. But I knew that if I didn't buy her, I probably wouldn't see another one.

So, I became the proud owner of a 1968 USSR Lirika upright. 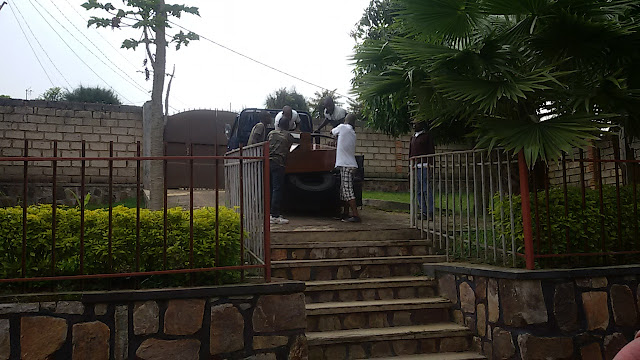 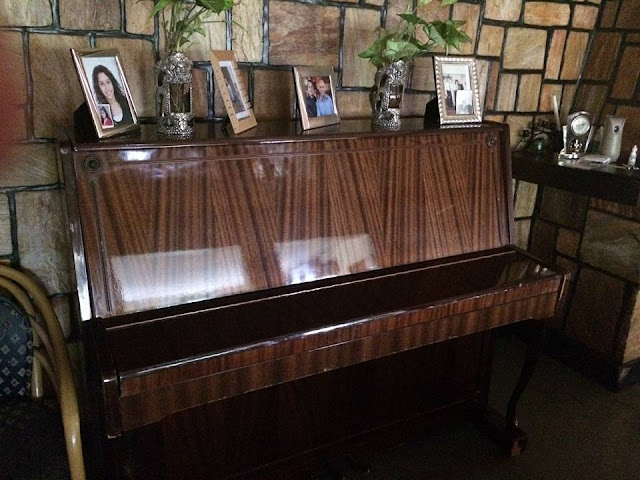 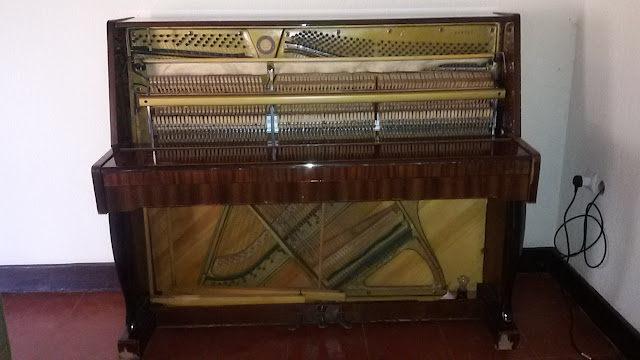 I have absolutely no idea how she came to be in Rwanda. If anyone knows the story, I'd love to hear it.

Once she arrived, I opened her up and gave her a good clean. 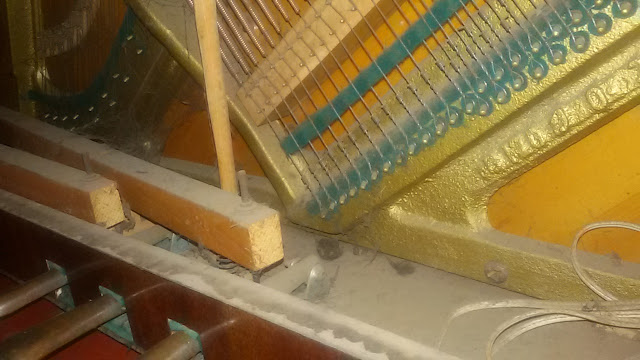 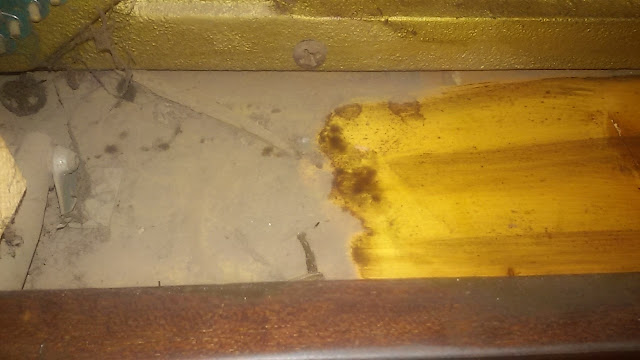 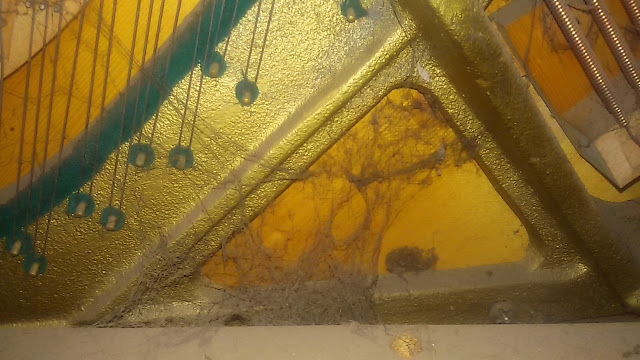 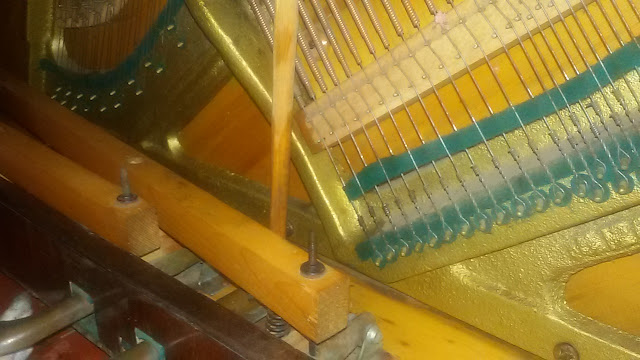 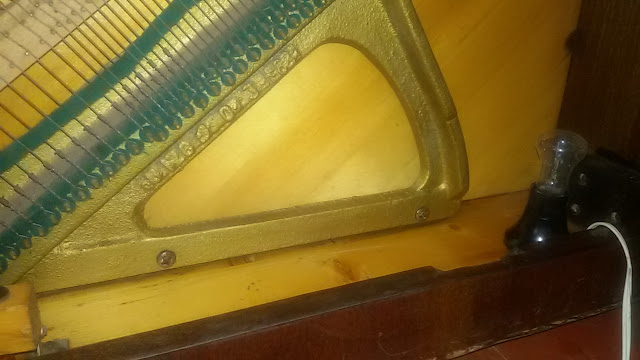 As it was almost Christmas, it was a nice surprise to find a festive cocktail stick inside. 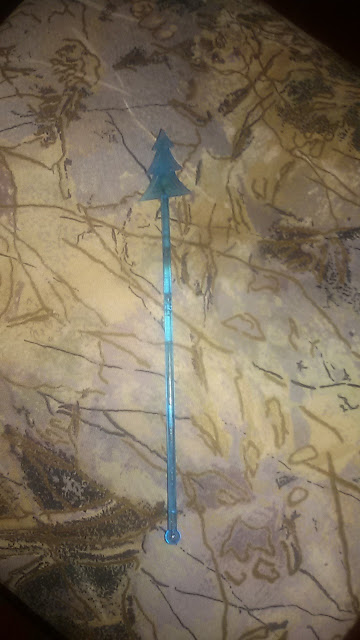 The only problem was, as hard as it is finding a piano, it's just as hard finding someone who can fix one. Having spent so much on her, I decided to make her my project and have a go myself. With guidance from Howard Piano Industries in the US, who do some excellent video tutorials on YouTube, and a copy of Pianos Inside Out by Mario Igrec, I set to work. 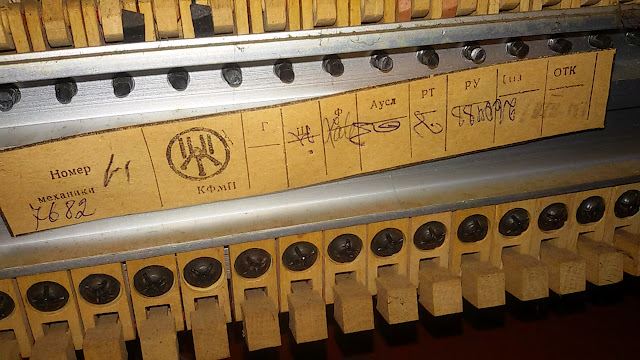