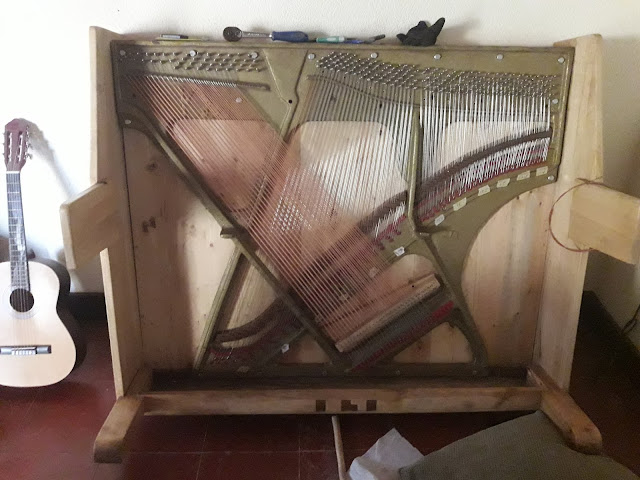 Again, we were hoping to be able to shout about finishing stringing the piano, but we hit another snag. Turns out the replica frame isn't an exact copy of the original. This led to having to remove the backrest in the last post, so the bass strings reached the bridge pins.

The same issue of variation means the bass strings we ordered aren't a perfect fit. For the most part it doesn't make a noticeable difference, but for the last few, it does. We're going to have to measure again and order some replacements. 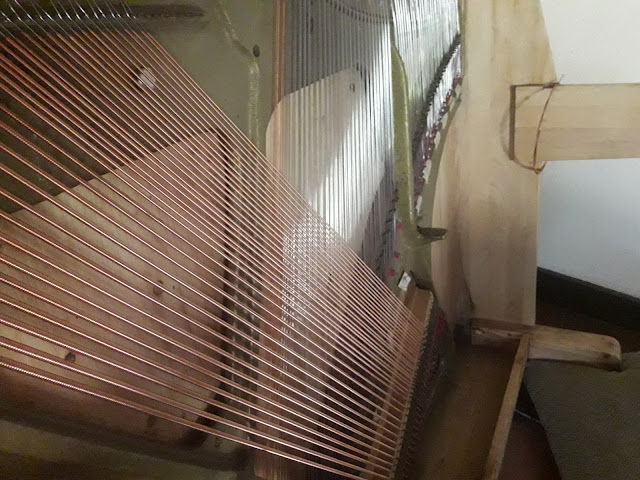 Also have a misalignment in a few of the bridge pins. Dés might be able to straighten this out, and it's another part of this being a prototype. We're making a lot of notes on how to do things better next time. So, we're getting there, but it's taking a bit longer than we'd hoped. 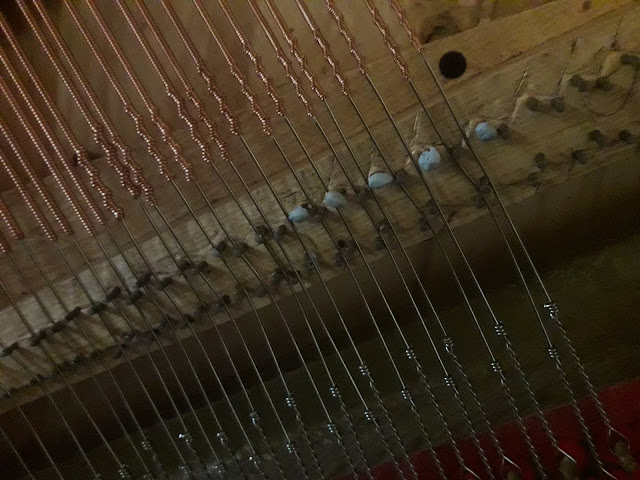 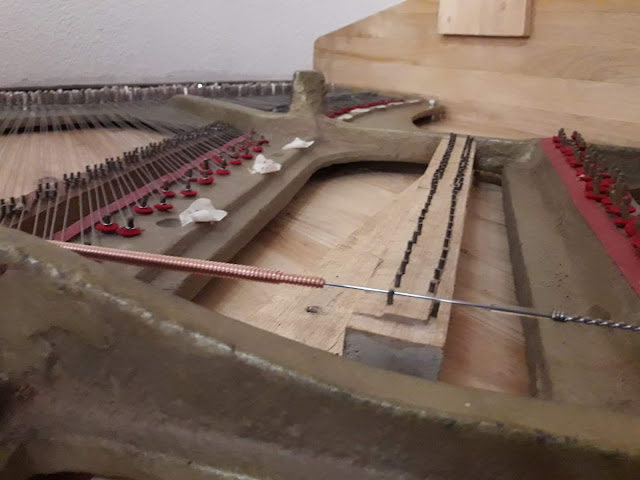 So, had a little hiccup when we started to string the bass section. The bridge pins on the lower-bass section were about 1 cm too far back for the wire. 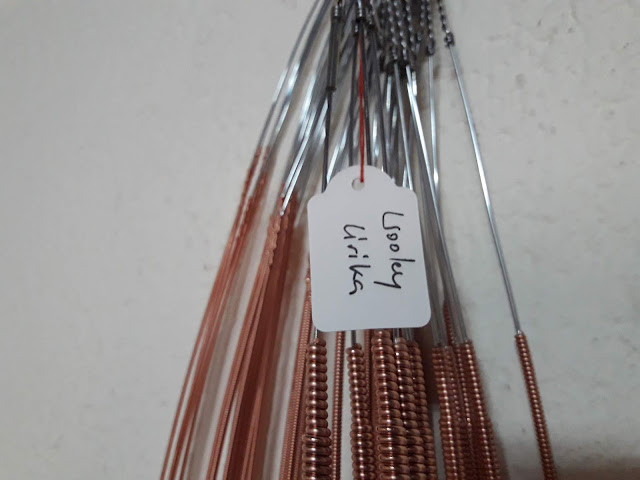 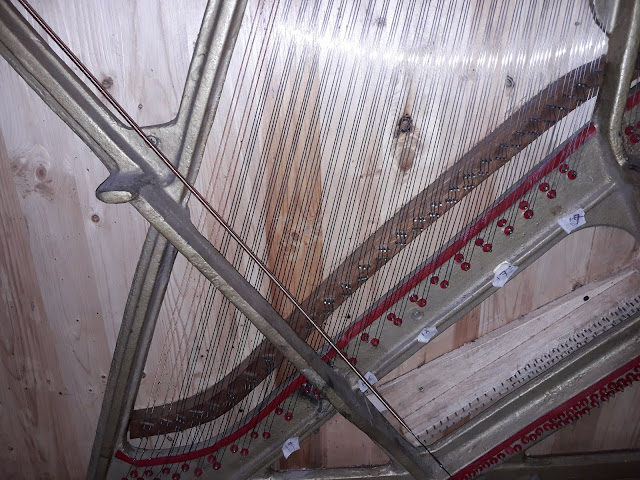 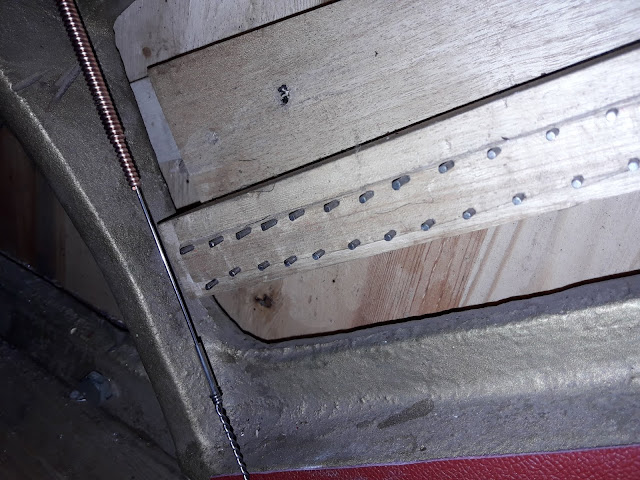 So, this morning Désiré and Paulin dropped by to fix the issue. Paulin works at Dés's carpentry business and is specifically helping Dés with all things piano-related. He was responsible for putting in many of the tuning pins. 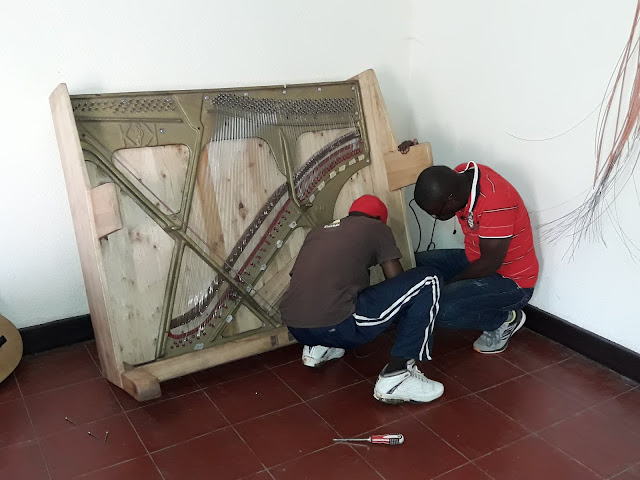 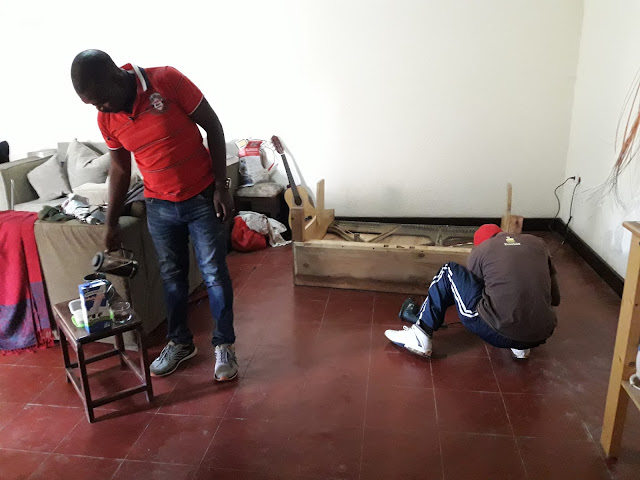 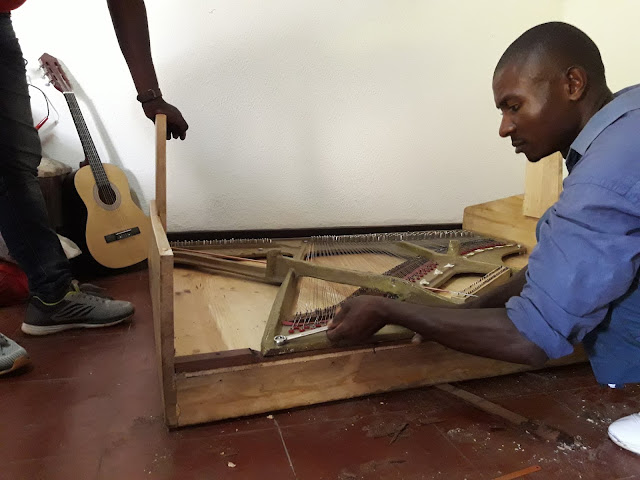 That last one is Paulin reattaching the string frame after reducing the thickness off the wooden back rest. 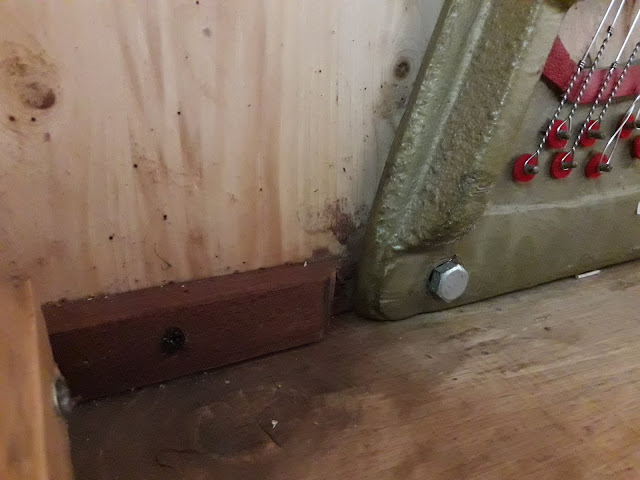 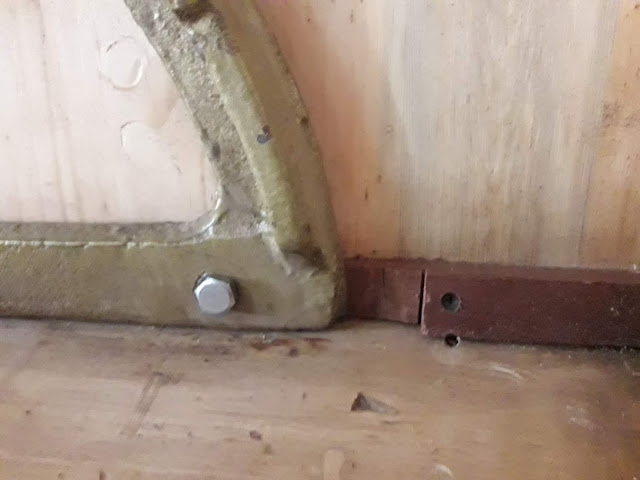 We think this came about because the string frame might not be an exact replica of the original Lirika. A slight difference in casting could be responsible for the issue.

The guys worked really hard on this. It took around four hours to do it right, without disturbing any of the strings or tuning pins.

The bass section now fits the bridge pins properly and we can continue with the final stage of stringing. 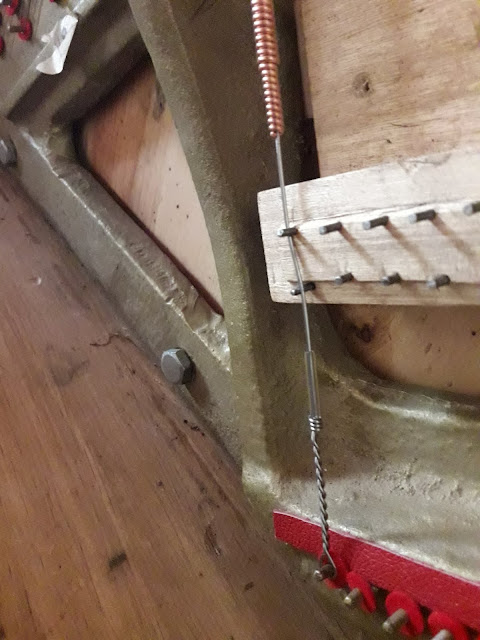 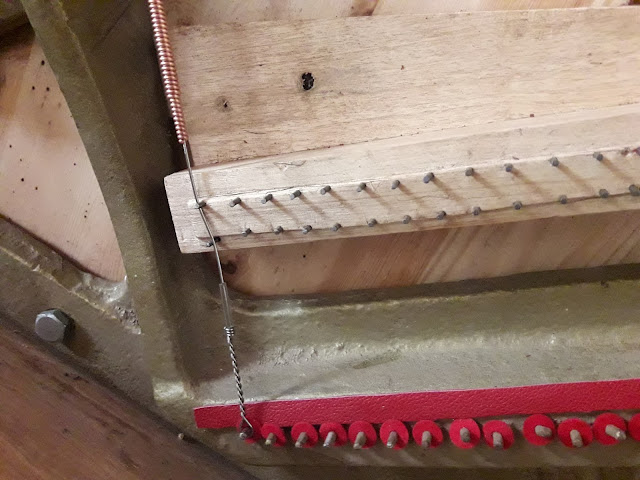 World Map Played on a Piano


This is just delightful!

Read about how it came to be in this article. 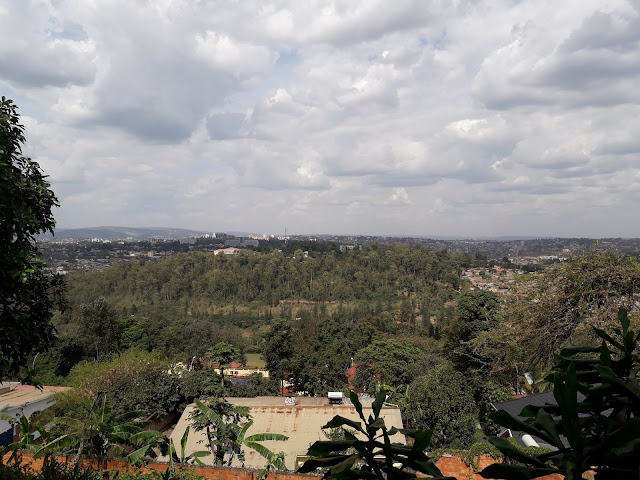 We tweeted last week that we were off to tune our first Steinway in Kigali, but we got that a little wrong. It's actually a 1985 Grotrian-Steinweg. That's sort of a cousin of Steinway, and so often confused that there was a whole legal debate about it:


Grotrian-Steinweg's history dates back to 1835 when the first Steinweg piano factory was built by Heinrich Engelhard Steinweg (later known as Henry Steinway after his emigration to the US where he founded Steinway & Sons). In 1856, Friedrich Grotrian became a partner; in 1865 his son Wilhelm Grotrian and two associates bought the factory and the right to market their pianos as successors to the Steinweg brand. Ensuing generations of Grotrian family members led the company to become one of the finest piano manufacturers in Germany. Grotrian-Steinweg pianos were preferred by some famous pianists, and they received accolades at the World's Columbian Exposition in Chicago. Grotrian-Steinweg operated an orchestra and a concert hall, and established sales rooms in a half dozen major cities in Germany, and by 1920, in London as well. At its peak in the late 1920s, Grotrian-Steinweg employed 1,000 people and made 3,000 pianos per year...

Grotrian-Steinweg sought to expand into the US in the mid-1960s. Steinway & Sons sued to prevent them from using the Steinweg name, resulting in a 1975 decision by the United States Court of Appeals for the Second Circuit. The case set a precedent in describing "initial interest confusion": that the brand Grotrian-Steinweg could cause piano buyers to temporarily confuse its brand with the brand Steinway & Sons. The court ordered Grotrian-Steinweg to stop selling pianos in the US under the "Steinweg" name. Afterward, the company formed a business entity named Grotrian Piano Company to sell pianos in North America. - Wikipedia

Still, it was a very nice piano, in a house with a gorgeous view. A couple who moved here two months back. Always nice to see a new piano in Kigali. 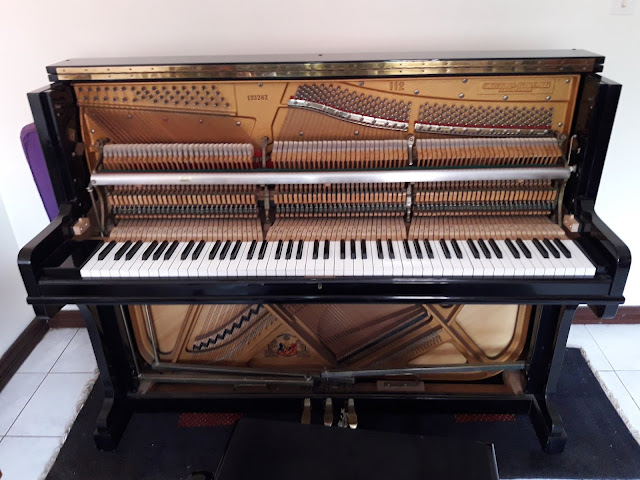 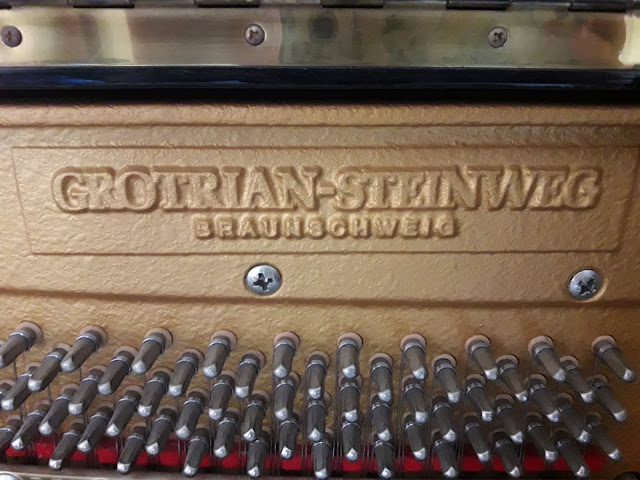 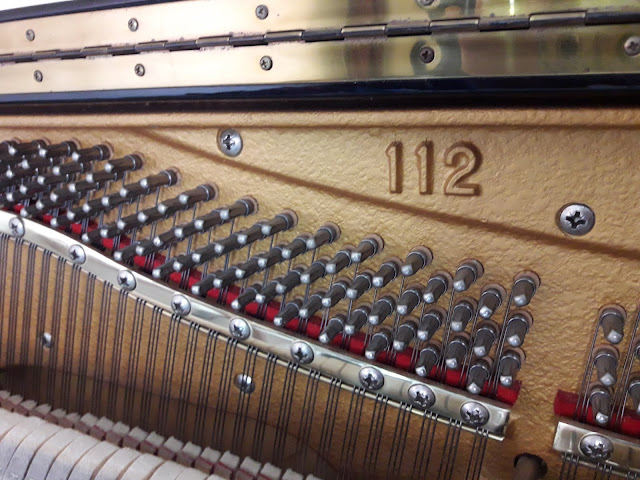 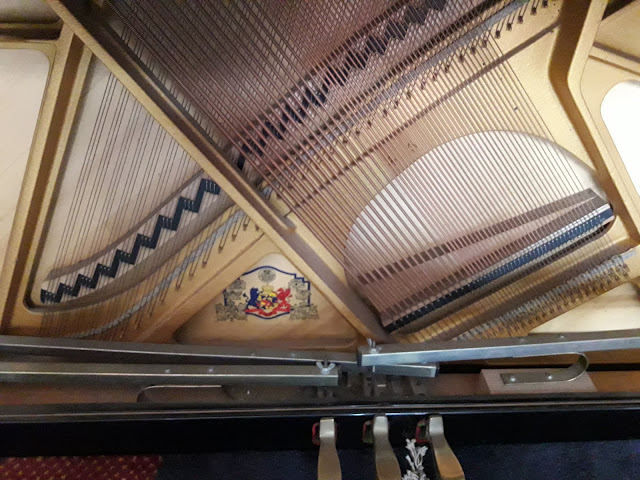 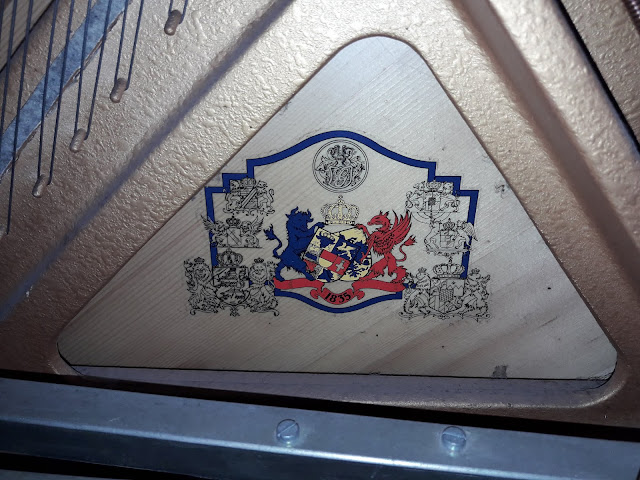 Despite having been shipped halfway around the world, it held its tuning impressively, and whoever tuned it last was very thorough. Bought second hand in a shop in Italy, it's been around Europe, Asia and Kenya before here.

It was an easy piano to work with and nicely designed. Had the easiest-to-remove mute rail ever invented. No fuss, just slide it out and back in.

We hope to see it in another six months when it needs a proper tuning.

Stopped to look at some lovely roadside flowers on the way home. 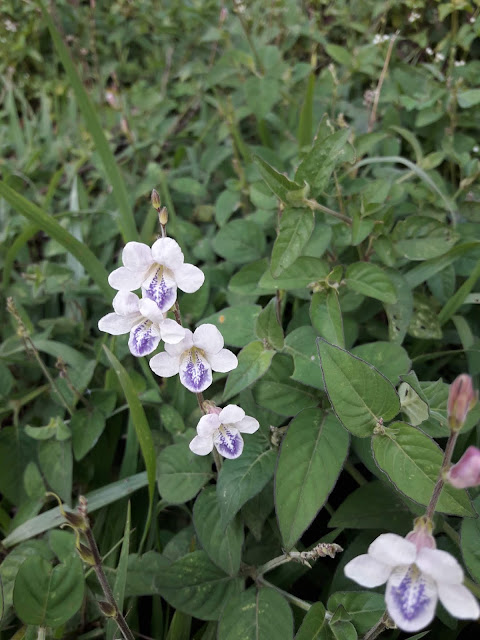 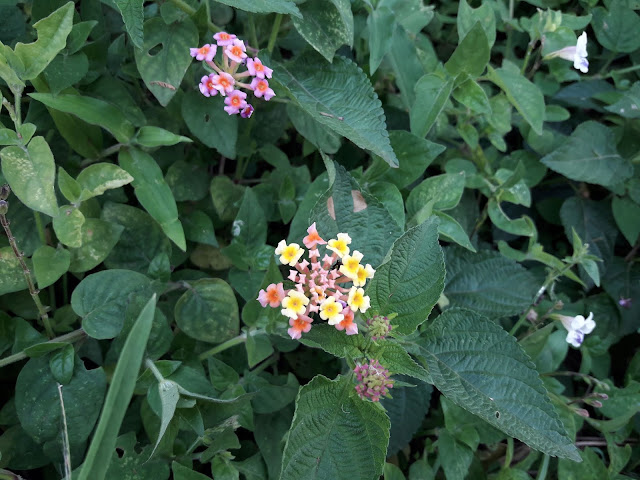 Désiré is working on replicating the action frame. We've opted to make it from wood as making it from metal would cost a lot more. The brackets would need to be cast and we'd need to try to source special metals for the rest. Obviously, the concern with wood is whether it warps with the climate, but there's only one way to find out.

Hopefully, we'll finish stringing early next week. Whilst Dés works on the front of the piano, the legs and keys, Marion will start putting the hammers back on the old Lirika action so that we can use it to tune the new piano.

By our reasoning, there's no point starting to make a new action until we know that the new piano can be pulled up to tune and sounds good. Providing everything is in order, we'll turn our attention to whippens, jacks and hammers. 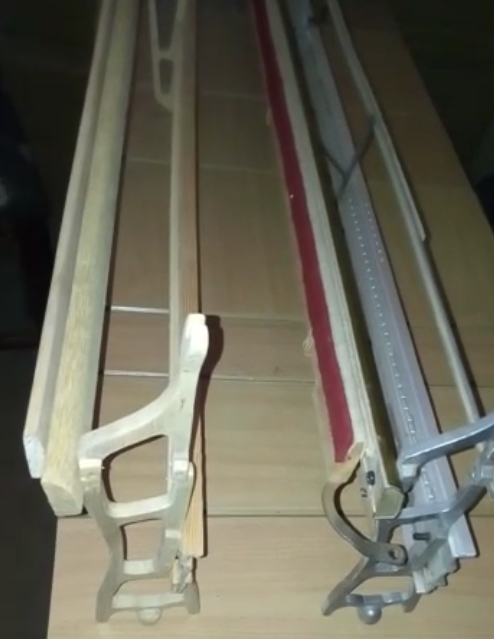 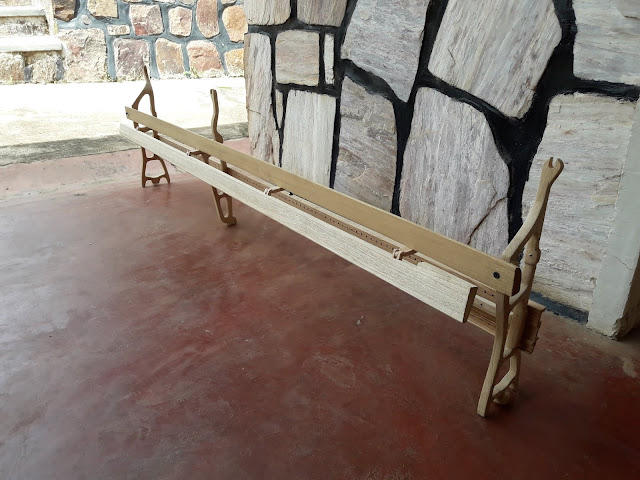 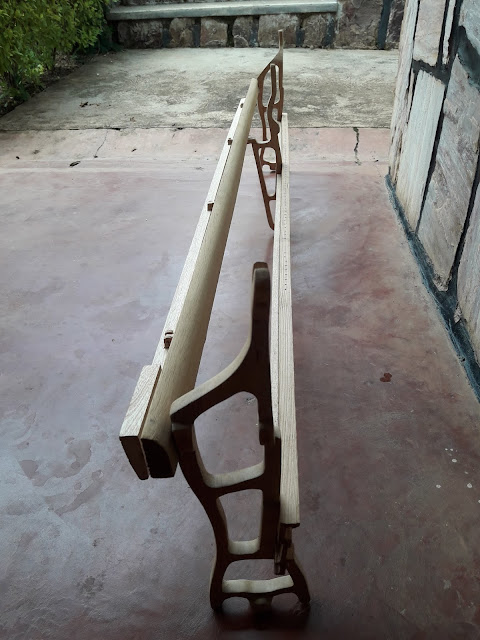 That was certainly a labour of love, but we're finally done with the midsection. Just the bass strings to go, and it's sounding good.
at 06:31 No comments: 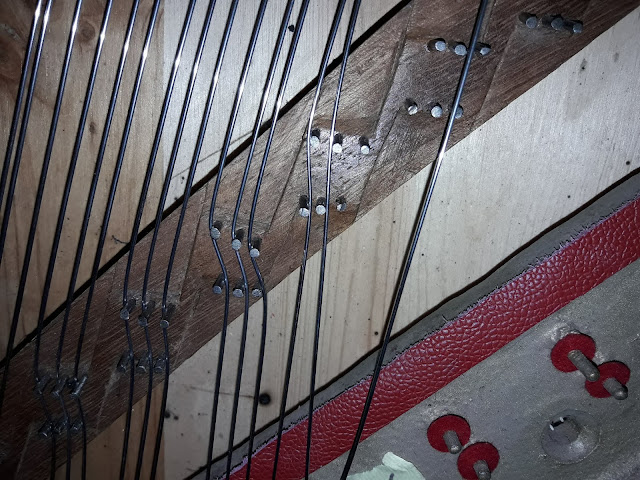 Hi everyone. Shamefully late on an update. Had things all been going well, this would probably have read 'We've finished stringing'. Unfortunately, we hit a few snags.

Couple of the bridge pins were slightly misaligned, which led to the problem above, where the S bend didn't hold and kept popping out. Marion got intimate with a soldering iron, but the electricity didn't seem strong enough to keep it heated, so she resorted to superglue and strips of copper wire. Seems to be holding.

Almost finished the midsection when she noticed the number of remaining hitch pins didn't tally. Counted them over and over. Dés even counted the originals again to be sure. There was nothing wrong with the frame, she'd just missed one of the pins further back.

The strings come down, round a hitch pin and back up. Sometimes, the pressure of tightening the tuning pins causes the string to pop off the pin. This must have happened, and she pushed it back onto the wrong pin - one in front - throwing everything else off count.

This meant going back and moving all the strings back a pin, but also required a lot of restringing because the pins before require longer lengths of wire than the pins after.

You might remember there was a dodgy pin that we had to send back to Chillington to re-weld. Well, during restringing, that gave up the ghost and snapped off. 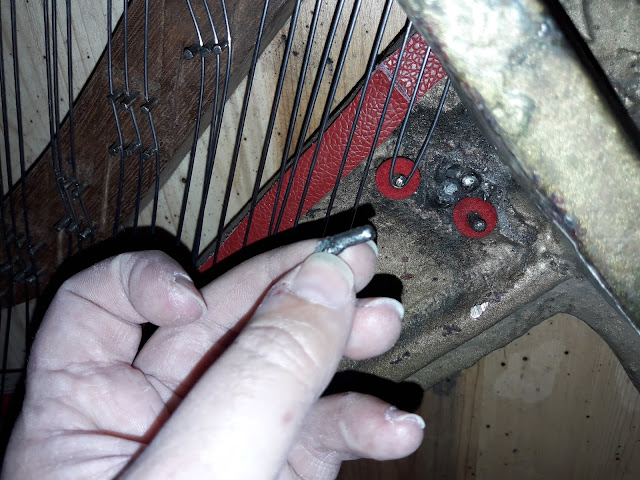 We thought we were facing another trip to Chillington, which gets expensive as we don't have a van, so we need to hire one - and five men to lift the piano.

Thankfully, it didn't come to that. We owe a huge debt of gratitude to Chillington's engineer, Julias. He hopped on a moto and came to take a look. What we couldn't see was that the bit still embedded in the frame was loose. With a pair of tweezers, he pulled it out and it was as long as the original piece. He set it with our hero, Superglue, and packed it with sand. 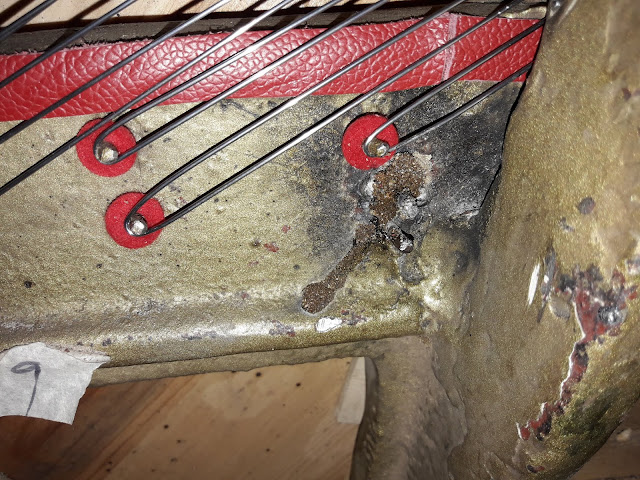 We admit to feeling sceptical, but we've just strung it up and it's holding really well.

So, quite a few scuffs and bruises so far, but that's the point - it's a prototype. We're looking to find out all the things we need to do better next time.

So far, nothing so drastic it won't play.

It's just taking a little longer than we were hoping. It all went wrong round about the time Marion was heard to say, "Huh, stringing a piano isn't as hard as I thought it would be..."
at 12:35 1 comment: