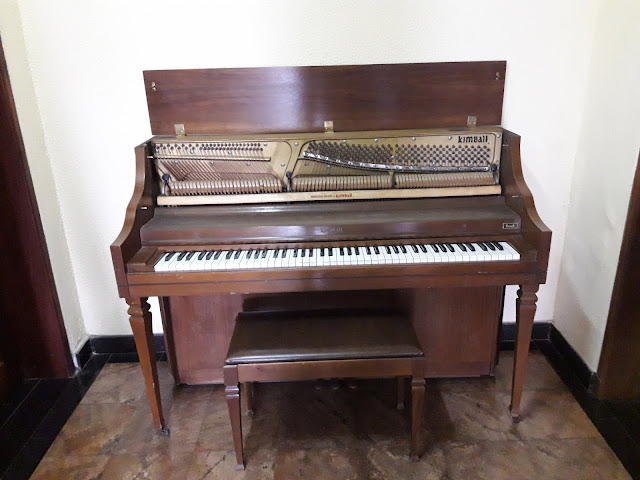 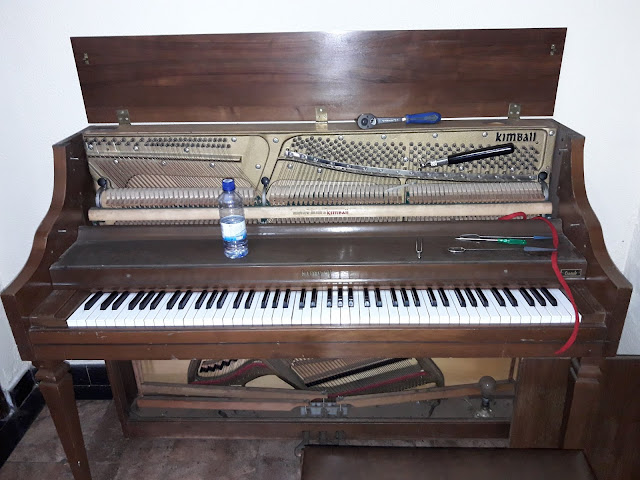 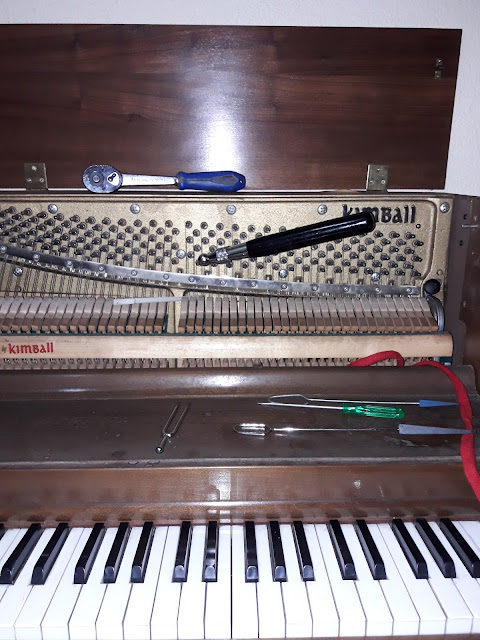 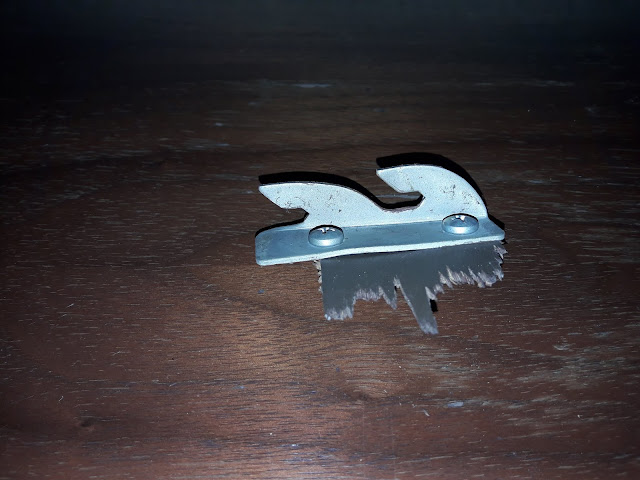 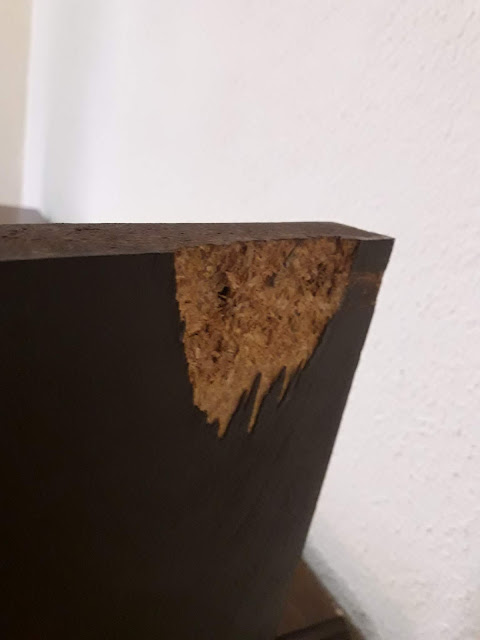 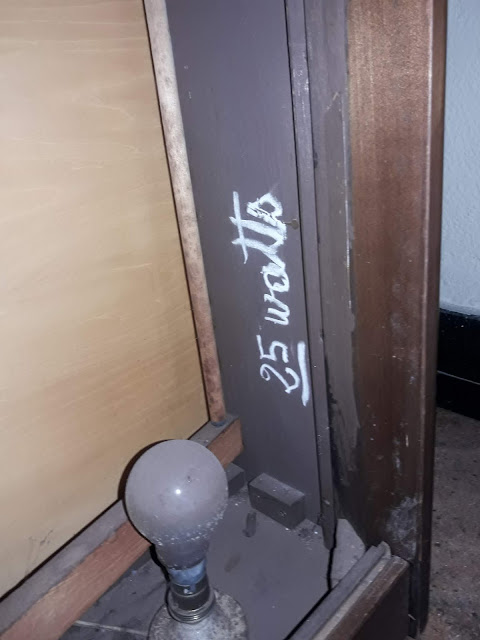 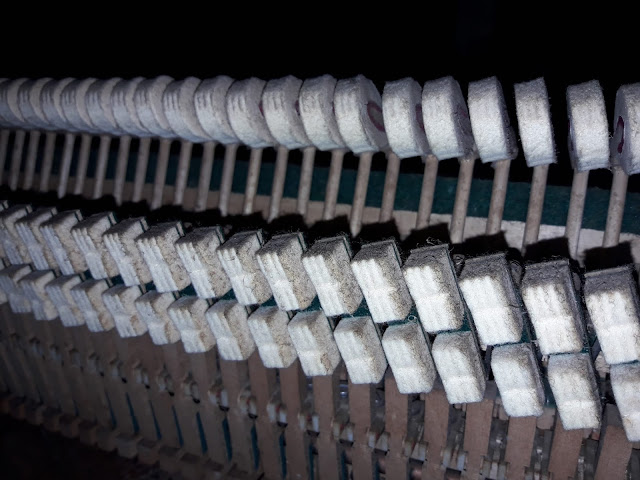 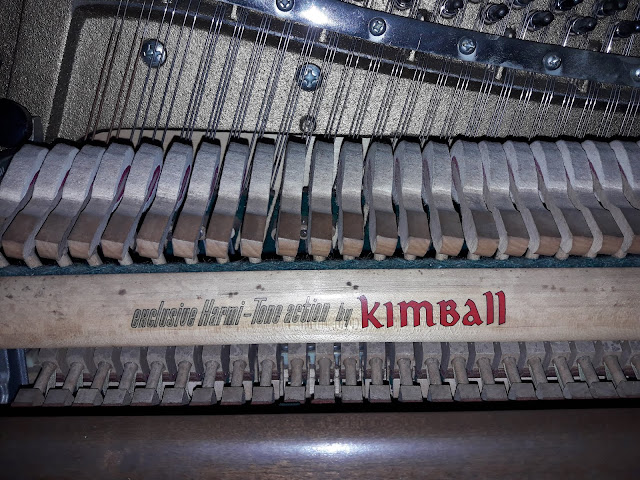 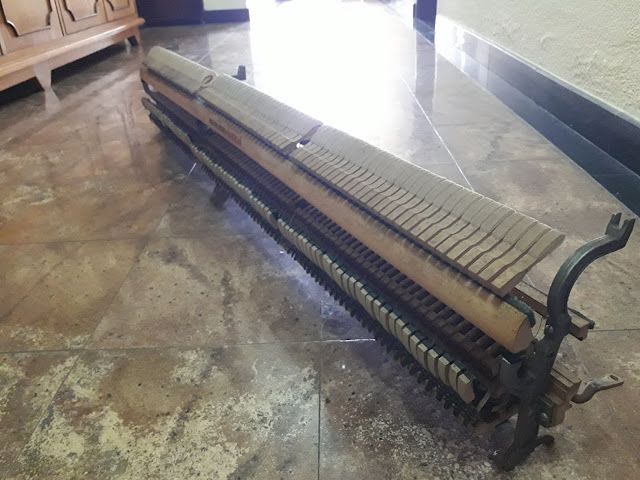 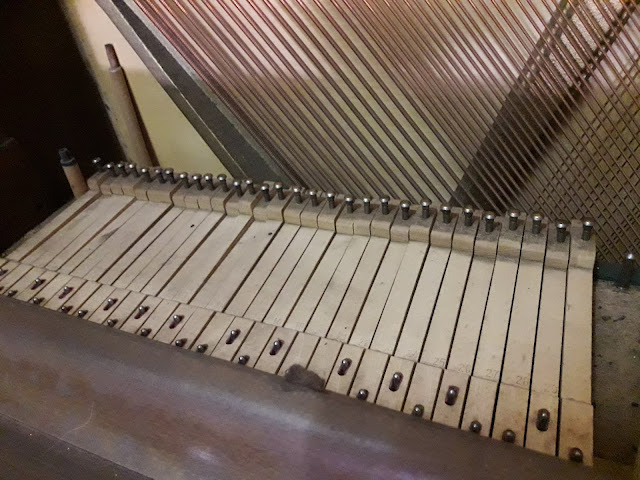 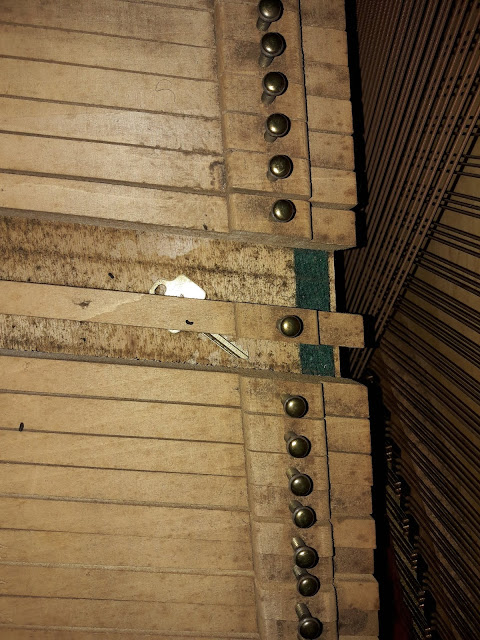 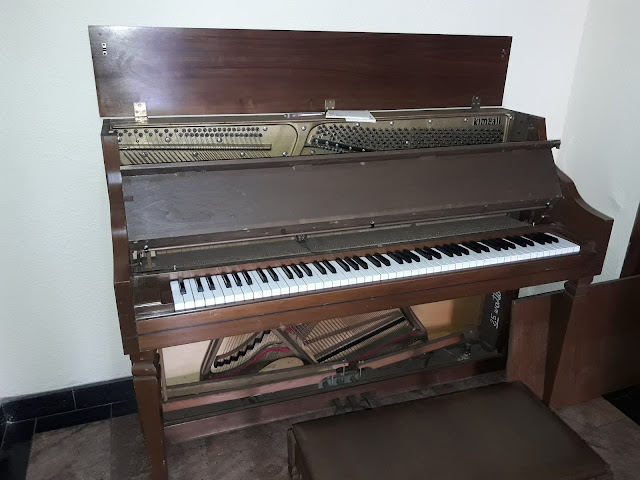 We had a lovely day yesterday showing Daniela from Senior Experten Service (SES) around our workshop. SES help retired German experts to find short-term placements in a range of sectors. We're in discussions about finding someone to come and help us get the prototype completed and to look at ways of making the build more efficient for the future. We're not sure if we'll get somebody yet, but it was a really good meeting and a pleasure to meet Daniela and learn more about the organisation.

We're still working on the keys. This is a clip of Paulin in action. 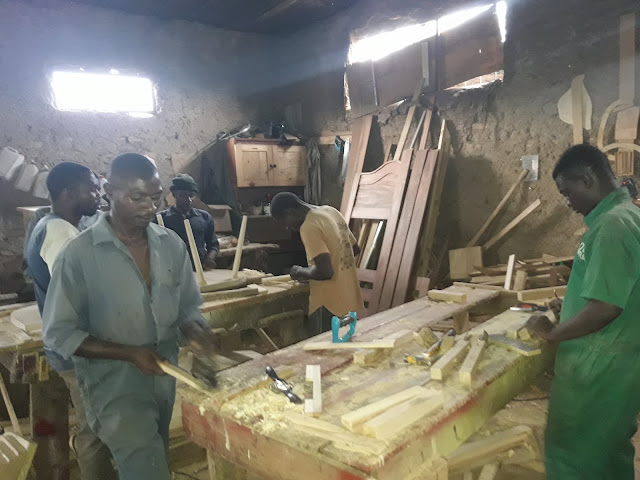 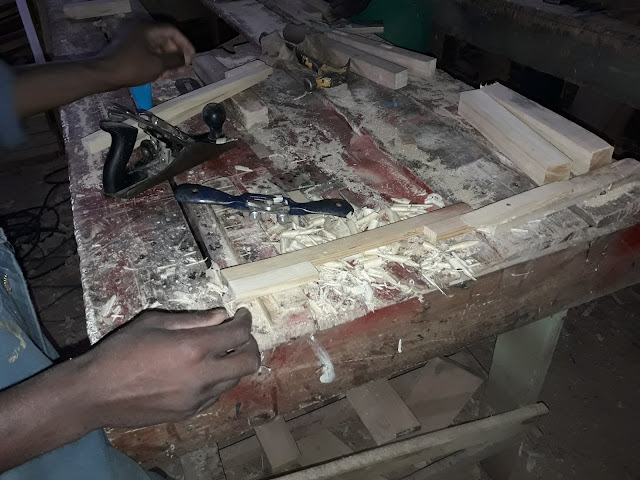 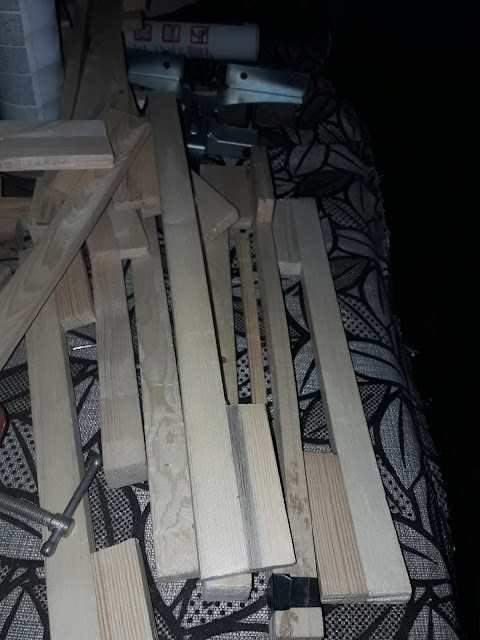 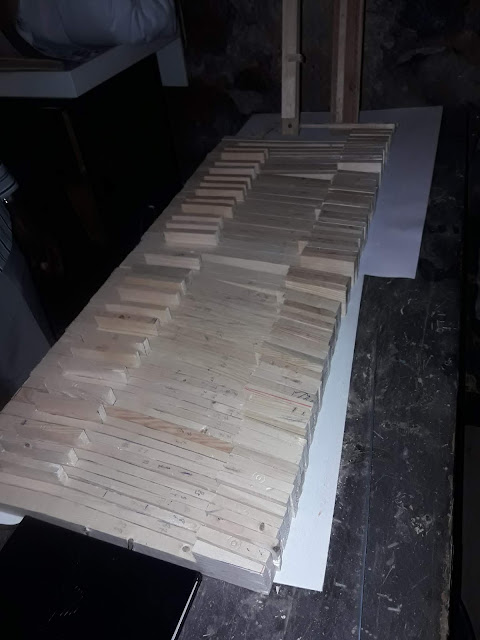 There's 88 of them in total. Here's a comparison of the original Lirika key (below) with the ongoing progress of our own. 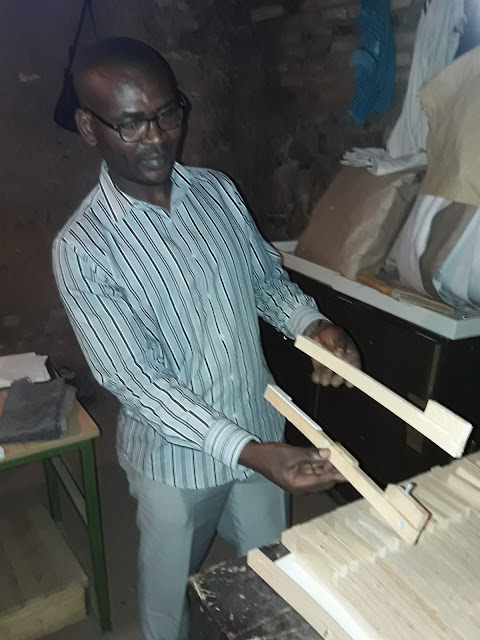 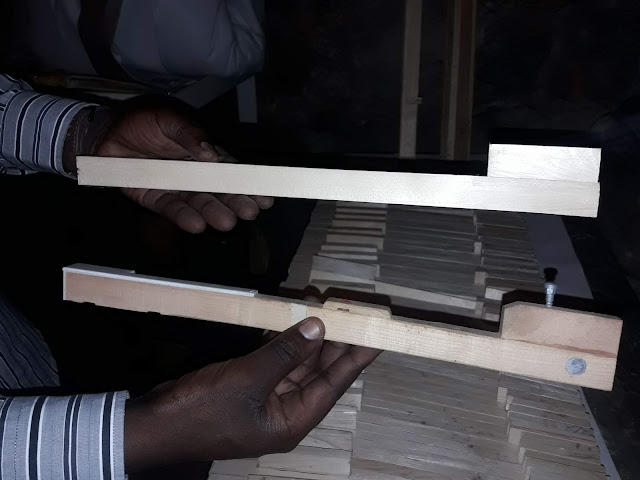 88 piano keys pre-sanded. We're still deciding what to do with them. Whether to go for traditional black and white, or whether to try something funky. We were thinking igitenge before, but the lady who knows how to do that with epoxy resin has left and it might be a bit busy on the eye. We'll use igitenge on the interior, but perhaps go for either traditional black and white keys or plain wood and stained wood. It's fun to think about, but first we need to sand down the keys, deal with any gaps or inconsistencies, and - more mind-bogglingly - figure out how we're going to weight them. Traditionally, key butts contain a small lead weight to help them fall back after playing. 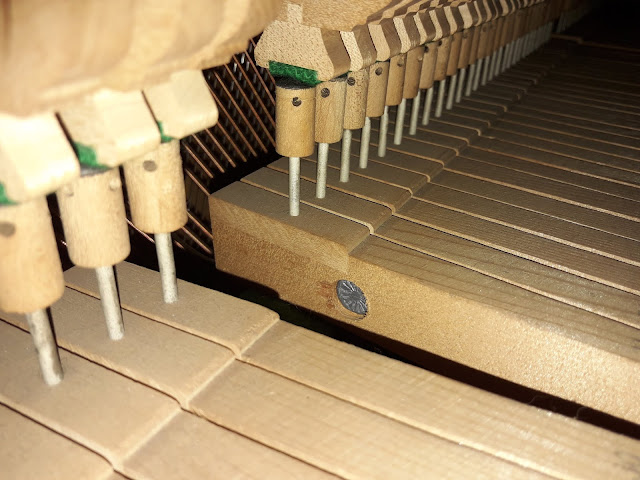 The weights themselves aren't expensive, but postage is always very costly and often very lengthy, so we're always looking for alternatives. It may be that we can melt down lead and make our own weights, or perhaps there's another material we could play with that gives similar drop.

Fun things to think about. Speaking of fun, Chillington have completed the pattern for the string frame, so we get the original Lirika frame back next week. That means we can start rebuilding... with a few modifications. More on that shortly.

Top Tips when Choosing a Piano 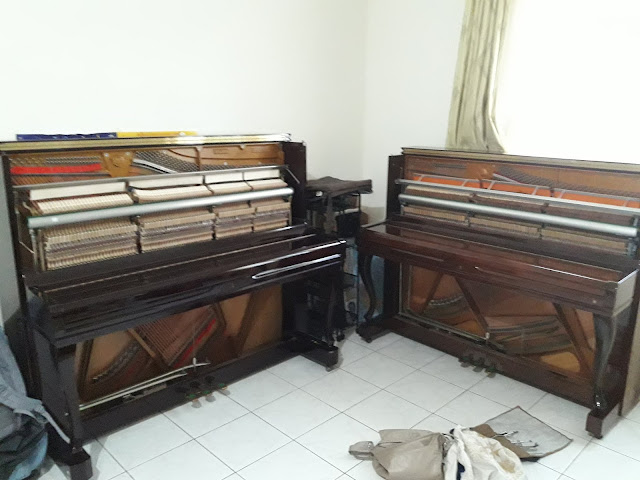 This week, we received a call from a couple looking to buy a piano in Kigali. It's quite rare to find one, but there was a gentleman who owns two and was willing to sell one. He gave them a choice, and they asked us to come and check the pianos over to help them decide which one would be the better investment and to make sure there were no underlying problems.

We thought we'd take this opportunity to give the lowdown on what to look for when considering whether to buy an upright piano.

The first thing you want to do is to open the piano up by removing the upper and bottom boards, so that you get a clear view of the instrument. The top board usually has a little catch on either side. Lift the top of the piano, reach in to unhook the catch, then simply lift the front board up and away from the piano.

The bottom board usually has a catch of some sort at the top, below the key board. It's often a slim piece of metal or wood that you push up, then pull the board forward and away from the piano. It's easier to remove and replace the bottom board if you sit in front of it and use your feet to help balance it.

Once you've opened the instrument up, you can start to look around.

Check for the serial number. You can then use something like the Piano Age Calculator to work out roughly how old it is. It won't always be possible to find a serial number or information on a specific model, but it's a place to start. 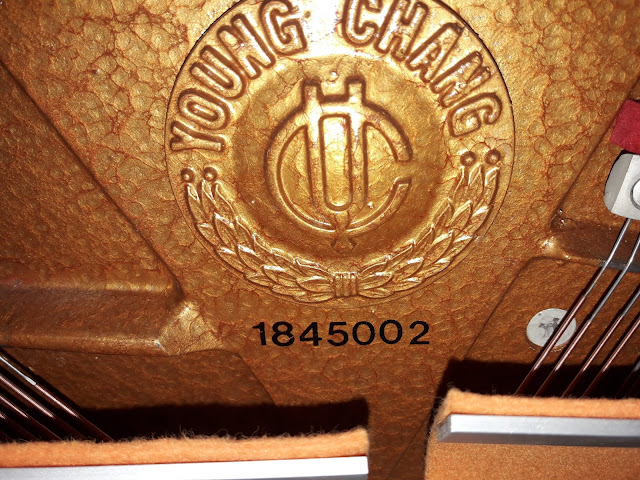 These two were both Korean makes, a Young Chang and a Samick. The Young Chang was circa 1992/93. The Samick was harder to date but given the high-gloss finish and similar wear, we suspect around the same age. 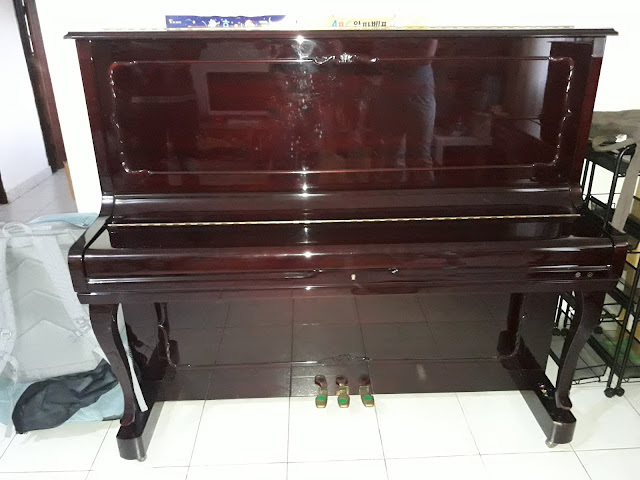 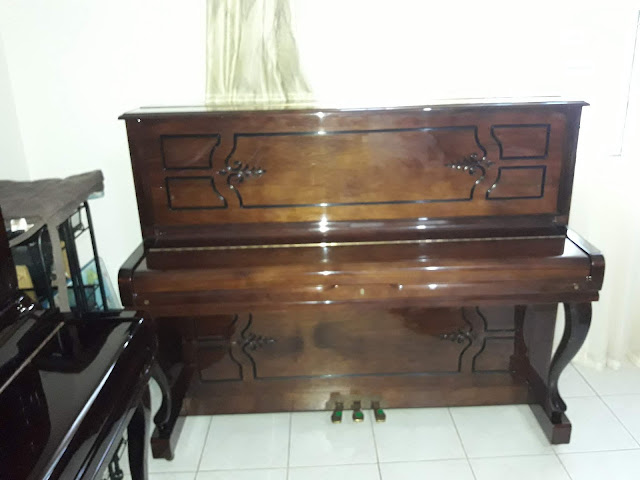 The first thing to check is that all the hammers and keys are working. Start from one end and watch the hammers as they strike to check that they move forward and fall back smoothly. Do this for both the white and then the black keys. Then choose a few random keys and strike them several times to make sure they don't lose their strength when you play the same key in quick succession.

Whilst you're doing this, you should also be able to check whether there are any strings missing, both in the bass section and the steel section, which is sometimes harder to spot straight away. Check both above and below for missing strings as they're sometimes easier to spot on the lower part, especially if there's a mute rail on the upper part.

Next, check that all of the pedals are working. There's usually three on a modern upright: half-blow, mute and sustain. Half-blow moves the hammers closer to the strings, mute drops the mute cloth, and sustain raises the dampers. Not all pianos have a mute rail, but check these all work smoothly.

Finally, take a clean piece of tissue and run it up a few of the strings just below the pins. When you remove the tissue, is there rust on it? If a piano has been kept in damp conditions, the strings might start to rust. Replacing one or two strings isn't a problem, but if a large number of strings are showing signs of rust, that can get very expensive in the future, especially the bass section. Also, look at the point where the hammer hits the string. If the spot where it hits the string is very shiny, but the rest of the string is much duller in comparison, then the strings are getting old and might need replacing at some point.

Next, get down below with your torch and take a good look at the soundboard. Make sure there aren't any holes or cracks through it.

Load up TuneLab or another tuning program and check whether the piano is in tune. It's okay if it's not, especially if it's been moved recently or hasn't been tuned in a while, but is it uniformly out of tune? Are the bass, mid-section and treble out of tune to roughly the same degree?

For instance, if the treble is sharp, but the bass is very flat, that might be an indication that the bass pins are slipping. Pins slip when the tuning pin holes are worn and not tight, causing the piano to slip out of tune more quickly than usual. This is a problem that usually comes with age, so older pianos are more prone to pin slippage. Replacing the tuning pins to fix the problem requires major work and usually also involves restringing. If you are looking at an older piano and you suspect this might be an issue, ask to have the flat strings tightened, leave it a couple of weeks and go back to check whether they have held the tuning. This isn't practical in all situations, but if you can do it, it might help you make a final decision.

The most expensive things to replace are:

Provided there are no cracks in the soundboard, the hammers strike smoothly, it holds its tune and the strings aren't rusting, it's probably a safe purchase.

One or two missing strings aren't a problem, and being out of tune is likely if it hasn't been tuned in a while. These are minor things that won't cost a fortune to fix.

With the two pianos we saw, they were both in very good condition, so it came down to sound. The Young Chang had a much brighter sound whereas the larger piano had a softer voice. As there was nothing in it technically, the choice came down to preference of sound and design. In this case, the Samick won out. We're off to tune it today.

Do you have any other top tips when checking a piano? Leave a comment below.
at 09:24 No comments: