The Story of a Love Affair

Sorry! It has been a really long time since we made an update.

We are still working on the action alignment issue, but Dés had a bereavement recently and had to return to Congo to be with family. He has now returned and we continue to work on it.

In the meantime, we had a slight surprise.

Back before we really started any of this, Marion mentioned a broken Emile Vits she once saw in someone's basement. The story behind that was that Marion used to live in a house that she had to leave rather suddenly. She had become good friends with her landlord, whose family turned against him when they found out he was gay. As a result, Marion refused to pay rent to that family and her landlord helped her find somewhere else to live. In the process of house hunting, he took her to a very large house in the suburbs, where she saw two pianos. One was a Belgian Emile Vits and the other was a US Baldwin Spinet. 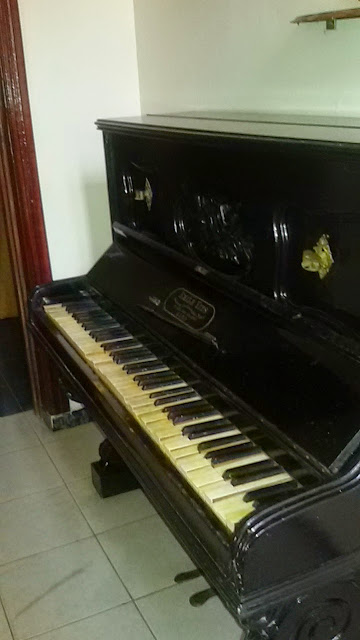 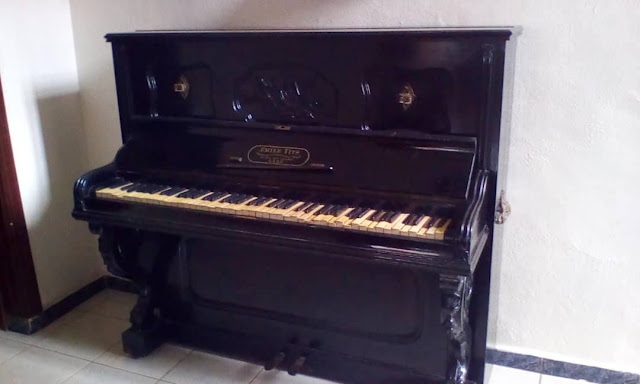 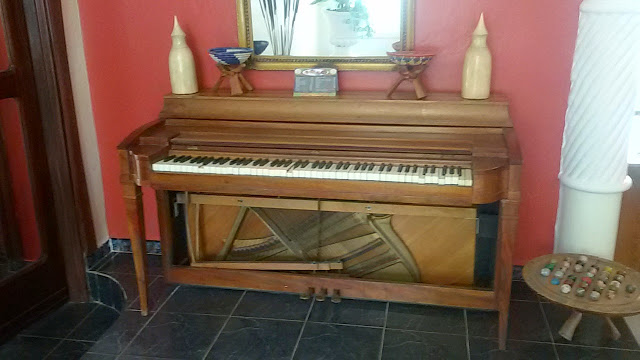 She didn't end up living there, but she did fall instantly in love with the Emile Vits. She offered to buy it, but the owner said it belonged to his family and wouldn't entertain the idea.

The friendship with her former landlord drifted over time, and she never could remember where the house was, though she never forgot the piano. Part of the reason for starting Kigali Keys was the vain hope that someday, the owner might get in contact again.

And... that's exactly what happened.

Five years later, she received a call from a man who wanted to know if we could salvage his piano. Marion went to meet him and he drove her to his house. As they pulled up in front of it, Marion had to pick her jaw off the floor - it was the house.

The owner looked on astonished, as she pulled her phone from her bag and showed him a picture of the inside of his own piano. They had never met before, because the person she met last time did not own the house. The true owner works overseas a lot and had sublet it at that time. He is back at the moment because of COVID, and he no longer rents out rooms in the house.

However, the two pianos are still exactly where they once were. Although the owner, Adrien, asked Kigali Keys to fix the spinet, he very patiently waited whilst Marion ran down into the basement to hug the Emile Vits.

Unfortunately, it's in a bit of a state. Over the past five years, a family of mice moved in and built a small city inside it. 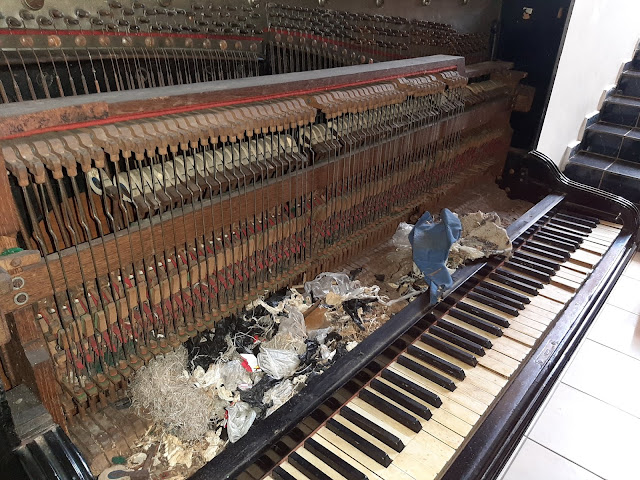 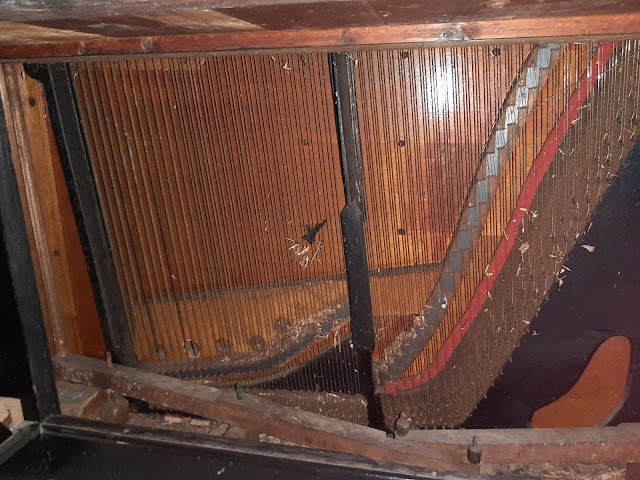 But, as you can see, it's a birdcage piano with a vertical frame and ivory keys. Given the address on the fall board, we reckon it's about 130 years old. Very few of the keys still play, but those that do hint at a very nice sound. 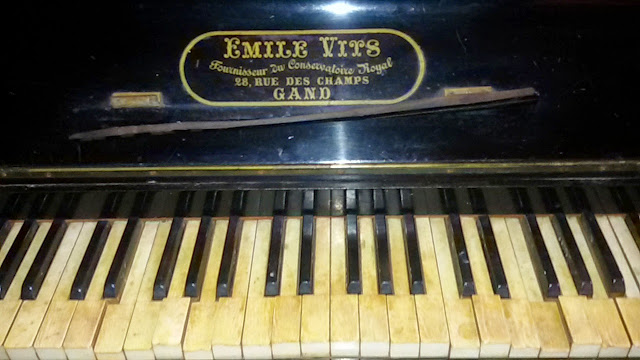 Marion always dreamed of finding this piano again, but restoring it would take a lot of work. It needs new pins, strings and hammers. However, the sound board and cage wiring look to be okay.

Both pianos have a haunting story. Adrian was here in 1994, living near the Belgian Embassy. In the aftermath of the genocide, he was walking down the road and saw these two instruments sitting on the sidewalk.

The soldiers agreed to sell them to him. He was training as a priest at the time and had learned a little piano in church. However, they were in a bad state, and have deteriorated further over time. It's lucky that he saved them, as they probably wouldn't exist today if he hadn't. We have contacted the Belgian Embassy, as Emile Vits is a Belgian make, but so far there are no leads as to who it belonged to before the genocide.

At Kigali Keys, our mission is to get pianos playing again. There are several broken and unloved pianos in Kigali that simply act as decoration. It's incredible to hear one play again, or just to tune one up after years of silence. We're considering whether to adopt the Emile Vits as a salvage project as it depends on income, but it's likely to start featuring more on this blog in the near future.

Meanwhile, we put in the time with the spinet and everything worked out really well. Due to the design, it's a very difficult instrument to work on. You can't just pop the action in and out to test it like you would on a normal upright, but we were all rather amazed by the end result - it sounds brilliant.